Main tourist attractions in Moscow – Red Square and the Kremlin of Moscow. That is the most popular starting point for all tourist trails.

The Moscow Kremlin, usually referred to as the Kremlin, is a fortified complex at the heart of Moscow, overlooking the Moskva River to the south, Saint Basil's Cathedral and Red Square to the east, and the Alexander Garden to the west. It is the best known of the kremlins (Russian citadels) and includes five palaces, four cathedrals, and the enclosing Kremlin Wall with Kremlin towers. The complex serves as the official residence of the President of the Russian Federation.

There are many theatres, galleries, museums in Moscow, so you can make your own tourist plan for any holidays duration and your journey won`t be depend on weather. 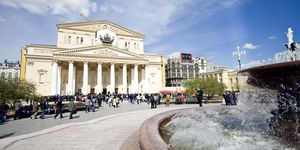 The Bolshoi Theatre is a historic theatre in Moscow, Russia, designed by architect Joseph Bové, which holds performances of ballet and opera. The theatre's original name was the Imperial Bolshoi Theatre of Moscow, while the St. Petersburg Bolshoi Theatre (demolished in 1886), was called the Imperial Bolshoi Kamenny Theatre. The Bolshoi Ballet and Bolshoi Opera are amongst the oldest and most renowned ballet and opera companies in the world. It is by far the world's biggest ballet company, having more than 200 dancers. The theatre is the parent company of The Bolshoi Ballet Academy, a world-famous leading school of ballet. 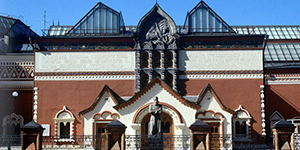 The State Tretyakov Gallery is an art gallery in Moscow, Russia, the foremost depository of Russian fine art in the world. The gallery's history starts in 1856 when the Moscow merchant Pavel Mikhailovich Tretyakov acquired works by Russian artists of his day with the aim of creating a collection, which might later grow into a museum of national art. In 1892, Tretyakov presented his already famous collection of approximately 2,000 works (1,362 paintings, 526 drawings, and 9 sculptures) to the Russian nation. The collection contains more than 130,000 exhibits, ranging from Theotokos of Vladimir and Andrei Rublev's Trinity to the monumental Composition VII by Wassily Kandinsky and the Black Square by Kazimir Malevich. 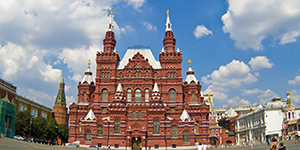 The State Historical Museum of Russia is a museum of Russian history wedged between Red Square and Manege Square in Moscow. Its exhibitions range from relics of prehistoric tribes that lived on the territory of present-day Russia, through priceless artworks acquired by members of the Romanov dynasty. The total number of objects in the museum's collection comes to millions. 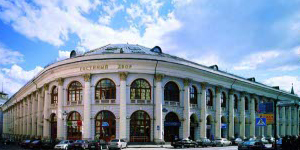 The Old Merchant Court in Moscow occupies a substantial portion of Kitai-gorod, as the old merchant district is known. Formerly accommodating both shops and warehouses, it was constructed of brick in the 1590s and underwent significant modifications from 1638–41. As the Russian capital expanded and the old structure became overcrowded, a new indoor market was completed nearby in 1665. 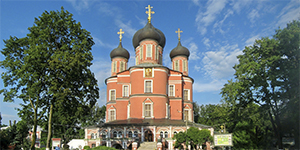 Donskoy Monastery is a major monastery in Moscow, founded in 1591 in commemoration of Moscow's deliverance from an imminent threat of Khan Kazy-Girey’s invasion. Commanding a highway to the Crimea, the monastery was intended to defend southern approaches to the Moscow Kremlin. 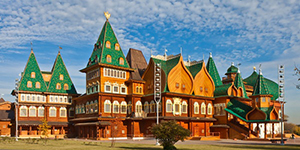 Kolomenskoye is one of the most ancient places of human habitation within modern Moscow. Archaeological items discovered in its vicinity witness Stone Age (V-III millennium B.C.) settlements once existing here. In old times the village of Kolomenskoye near Moscow came to be directly involved into the historical events known as the Time of Troubles.